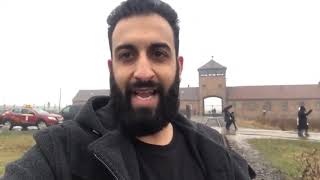 An imam’s message from the Auschwitz death camp

Seeing the horrors at the Auschwitz death camp is definitely not easy. But it is so important to keep the memory of the Holocaust alive. You gotta see this. Auschwitz Death Camp It is common for the Jewish people to visit the Auschwitz death camp as well as other concentration camps where the Nazis committed the worst atrocities. But how often do you have an imam visit? How often are people like Mohamad Tawhidi willing to risk their lives to share the truth? Sadly, not often.

After years of working with groups committed to building Jewish-Christian relations and support for Israel, I was introduced to similar work going on behind the former Iron Curtain. I traveled to Czechoslovakia, Poland and Hungary in summer of 1993 with friends who were part of an interfaith book club and who had been studying Holocaust literature. While in Poland I met with two Polish brothers whose family lived in Oswiecim, the small city just outside the gates of Auschwitz

Can Ilhan Omar Overcome Her Prejudice?

I was born in Somalia and grew up amid pervasive Muslim anti-Semitism. Hate is hard to unlearn without coming to terms with how you learned it. I once opened a speech by confessing to a crowd of Jews that I used to hate them. It was 2006 and I was a young native of Somalia who’d been elected to the Dutch Parliament. The American Jewish Committee was giving me its Moral Courage Award. I felt honored and humbled, but a little dishonest if I didn’t own up to my anti-Semitic past

The Biblical town of Ziklag was discovered. Although it was thought to be in a different area, archaeologists have uncovered details proving the location. Biblical Town of Ziklag The Biblical town of Ziklag was Philistine. While David was fleeing Saul, he took refuge in that city. Although there were other suggestions of where the city was located, these excavations at the site of Khirbet a-Ra‘i show evidence of Ziklag. Archaeologists discovered evidence that proved continuou

In the wake of the second deadly attack in six months on American Jews in their houses of worship on Shabbat, David French, a member of the Orthodox Presbyterian Church (OPC), published an article in National Review titled, “Dealing with the Shock of an Evangelical Terrorist.” The piece demonstrates an honest attempt to grapple with the fact that a person affiliated with the same Christian denomination of which he, French, is a member, could enter Chabad of Poway near San Die

Unlawful conduct of a SFSU professor

Dear Chancellor White, We are 80 civil rights, religious and education organizations, deeply concerned about the unlawful use of the name of California State University or any of its campuses to promulgate anti-Zionist propaganda and promote a boycott of Israel. Many of our organizations wrote to you last year about a hateful, discriminatory and threatening posting that appeared on the official Facebook page of the Arab and Muslim Ethnicities and Diaspora’s Program (AMED) in

BDS: A SUSTAINED ASSAULT AGAINST THE JEWISH STATE

In recently participated in an international conference that brought together activists from 30 countries to discuss the ongoing extreme global anti-Israel BDS campaigns. As BDS impacts negatively less on Israel’s economy and more on negativity toward Israel and her Zionist supporters around the world, I offer reflections on the history of BDS and how to fight it moving forward. BDS’s roots trace back to two arenas – the Arab states’ boycott of Israel and the so-called Durb

US Ambassador to Israel David Friedman had the honor of opening the path to the rediscovered City of David’s Pilgrimage Road. The honor was shared by US Mideast Special Envoy Jason Greenblatt, Sara Netanyahu, Sheldon Adelson, Israel’s Ambassador to the UN Danny Danon and other distinguished individuals. The Pilgrimage Road is the two-thousand-year-old main thoroughfare used by pilgrims to ascend to the Jewish Temple on Mount Moriah, after ritually purifying themselves in the

How Muslims transformed Jerusalem into a sacred city for Islam

Denying the Centrality of Jerusalem to the Jewish People

Why Haven’t the Palestinian Arab Leadership Established Their Own Independent Arab State?

Response to Whoopi: Why the Jews?

A House of Lies

The Myth of Jews and Slavery

How Muslims transformed Jerusalem into a sacred city for Islam

Denying the Centrality of Jerusalem to the Jewish People

Why Haven’t the Palestinian Arab Leadership Established Their Own Independent Arab State?

Response to Whoopi: Why the Jews?

A House of Lies

The Myth of Jews and Slavery